When a group of 15 seven and eight-year-olds become first-time birders for a day, there’s no stopping their curiosity, excitement and all around fun. That’s exactly what happened last week when JC led a group of students from the Montezuma Elementary School on a bird watching outing and nature lesson in the outskirts of the nearby town Cabuya.

The goal of the day was for the group of first and second grade kids to get an in-depth lesson about four birds they would be sure to see in the area:  Yellow-crowned Night Heron, Snowy Egret, Little Blue Heron, and Brown Pelican.

Learning the names of these birds in both Spanish and English, as well as details of the species’ appearance and behavior, the group then got a chance to view the birds through a scope and binoculars. Getting an up-close v

iew of the birds using these tools piqued interest even more and got the kids excited about the bright colors they could see and compelled them to seek out more and different birds on their own. The kids learned that there were officially 903 species of birds in Costa Rica and spotted a hummingbird which offered a prime opportunity to explain how hummingbirds are great pollinators, and thus the importance of protecting them and all wildlife.

In addition to the many birds kids learned about that day, howler monkeys made a grand appearance, and while these kids are no strangers to the sight of a howler monkey, JC pointed out some interesting facts about them and made his famous howler imitation much to their amusement.

astly, as part of their final lesson, the kids each received a birding journal crafted from recycled cereal boxes, milk cartons and cardboard to integrate the concepts of recycling and environmental protection for the sake of wildlife conservation. Filled with new knowledge, the group will later jot down details and draw pictures in their journals recalling information from the outing such as the bird’s name, location, diet and migration patterns to reinforce their lesson. But before returning to school, Kevin, a local shuttle operator and driver for the day, encouraged each student to collect a few pieces of rubbish strewn around the beach to deposit it in it’s proper recycling bin back in town. These kids are awesome! We can see that they are truly inspired and already have great respect for the environment and wildlife around them. 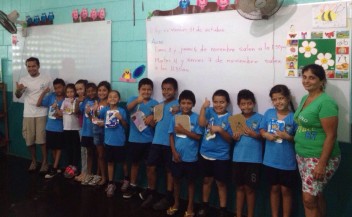 In timing with World Responsible Tourism Day, this small outing is just the type of thing we hope to continue doing with Montezuma School and other schools in the area. We love doing tours and sharing this love of nature and environment with visitors from around the world, but it’s just as important for us to share it with those around us every day as well.

Happy World Responsible Tourism Day! And thanks Montezuma School! It was fun spending time with you and we’re sure you will have some things you can teach us next time too. 🙂

It’s the first of May and the rain has finally started to fall on the thirsty southern Nicoya Peninsula. The rain is right on time with the beginning of ‘low season’ for tourism in Costa Rica, which runs roughly from May to October. While the mad rush of tourism may be slowing down, ‘low season’ may actually be the best time to visit. Here are 5 reasons we love the low season in CR and think you might enjoy it too.

Bird Watching – There is still plenty of bird watching to do during this time and while some of the migrating species may not be visible, there are many resident birds you can easily spot. (Tip: Arenal area is great for viewing Toucans year around, and JC is happy to help novice birders spot them or any other birds on your viewing checklist.)

2. Less Crowded – Since the rush is over, there’s a more tranquil atmosphere especially in beach towns. Fewer people are jamming into the small towns and stealing the quiet away from your relaxing vacation.

3. Cooler Climate – In some regions like the southern Nicoya Peninsula and Guanacaste areas, it is HOT during Costa Rica’s summer. Low season brings rain and cooler temperatures so you can enjoy the outdoors without the heat. Just pack your rain gear and you’ll love the respite from the heat. Rain also means greener, more beautiful landscapes for these drier regions of the country. Don’t worry, if you’re looking for sunshine you’ll still get plenty here.

4. Deals – Hotels usually offer cheaper rates for low season, or shoulder seasons and who doesn’t love a good deal? Many tour operators also offer cheaper rates on activities, however you should consider that many tours require a minimum number of participants to run the tour, and since there are fewer tourists around, it may be difficult to book these. As an alternative, you can take a private tour or hire a private guide for slightly more than a group tour. The benefit is that you’ll get more personal attention, probably get to see more, and you’ve likely already saved some money on your hotel stay.

5. Connect with Locals – It’s quieter, less crowded and not as busy, so that means you get a little one on one time with locals. Take advantage of it and strike up a conversation with local restaurant and store owners. You can always find out lots of interesting information you wouldn’t find in a guide book or brochure this way. (If you’re a little shy, we can help you connect with locals on our “Let’s Get Local” tour.)